skip to main | skip to sidebar

While my pursuits as an art therapist are over, the therapeutic use of art making is something I will always remember and intend to use in the future. I will continue to update this site on related topics. If interested in social art practices, check out my other blog: New Practices (see link on side bar). This blog will document my experience in discovering a new way to make art, within the public realm.
Posted by Jamie at 8:51 PM 1 comment:

One year ago I began 2 different blogs in another city. I had just recently moved to the Boston area from Miami, and was starting my graduate degree in Art Therapy at Lesley University. Fast forward one year later, to now, and I'm living in Los Angeles starting a new masters program in Public Art making, an MFA.

It's been a turbulent year for sure, questioning everything, feeling confused and stupid for having made mistakes. To look back now though, I am proud I made those difficult decisions, and had the courage to follow my dreams.

My motivations for going into Art Therapy was 2 fold: to become a professional, and to still be able to use art. The argument made sense to me, and I had to try it, but yet it didn't work. During the spring semester that I took off from school and worked, I considered all fields: librarian, politician, arts advocate, medical illustrator, doctor, engineer, and I'm sure there were more. I followed my partner's lead at the time, who was also looking for his dream job, and had found it a month before I decide I couldn't be a therapist.

The problem with the field for me was the idea of being a therapist. As much as I researched before, nothing prepared me for the experience, and then the outlook of doing that work for the next 20 + years. It wasn't challenging in the ways that felt fulling to me.

So thus, I went back to what I considered my idea of my "dream" job, inspired by an artist lecture (Alfredo Jaar) I attended at FIU during my undergrad studies. Jaar inspired me in the way he worked. It would only take 4 years or so for me to recognize this as a possbile option for my career. Thanks to the encouragement and support of my amazing partner, I cautionly decided to give it a shot. I mean, after all, what's the worst that could happen. I diecide I don't want to do this. Well, at least I know what that feels like.

I still have urges to explore other careers like a scientist or economist, but at least I can do that as an artist. An if I get out of this program, and decide to still do those things, I can. At least I will have pursued my dreams to the fullest.
Posted by Jamie at 8:42 PM 1 comment: 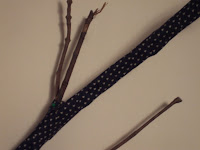 Directive:
Create a multicultural art project that explores your personal membership in various social profiles (gender, race, class, ability, sexual orientation, age and religion, as well as any others).
Time Limit: 2 weeks
Setting: made at home for presentation in class Power, Privilege and Oppression. Presentation was 10 min. long.

Process:
After my first draft (the painting previously discussed in prior post) I tried a performance piece. Still feeling that stereotypes were getting in the way, I decided to try to use unbiased objects that had nothing to do with the subject matter other than what I applied to them.

This began the process for the piece above. The top picture is me with the final object. My intent for this object was to make a "hobo bag", which I later learned is called a bindle stick. It is an anachronism, in that it is no longer a part of our everyday imagery, but a remnant of the past. This was perfect way to contain all of my social membership within. The following picture is of the objects within the bindle stick that represent my social membership profile (gender, race, class, ability, sexual orientation, age and religion). For each object I created an interpretation of my ideas behind these concept. And the photo on the bottom is a detail of the stick, which is actually 3 sticks bound by ribbon.

All of these pieces of me and my ideas can neatly be packed up into my bindle stick and taked anywhere I like. What a great metaphor for life.
Posted by Jamie at 7:59 PM 1 comment: 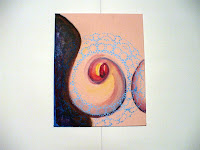 Directive:
Create a multicultural art project that explores your personal membership in various social profiles (gender, race, class, ability, sexual orientation, age and religion, as well as any others).
Time Limit: 2 weeks
Setting: made at home for presentation in class Power, Privilege and Oppression

Process:
This piece was a first draft for this project. I struggled with the various different pieces that I had to consider, so for this piece I narrowed it down to just gender. While this may look like a female body part, that was not my original intention. I was aiming for an abstract female form. The following post will reveal the final version for this project, which looks nothing like this. The most difficult part of this assignment was to try to create images/objects that were not stereotypes of these concepts (gender, race, class, ability, sexual orientation, age and religion, as well as any others).
Posted by Jamie at 7:37 PM No comments: 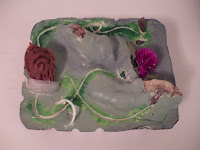 Directive:
Create an artistic response to an article assigned for reading in class.
Time: one week notice
Setting: Made at home for Art Therapy class - Clinical Applications

I began the making of the piece by pouring plaster into a tofu container, then I threw in a few pieces of trash and wood. When dry, I pulled the piece out of the mold and painted it. I then added a seed and a real flower that I found to represent some of the growth. 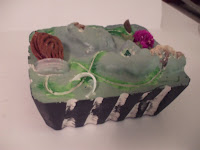 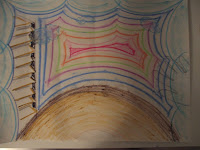 Directive: Create an image of your office space and what you would include in that space (does not have to be literal, can be qualities that you wish to bring into the office setting)
Time Limit: 15 min.
Setting: Classroom "Theories of Art Therapy"
Materials: oil pastels and paper

Process:
The art experience came was inspired by an article we read for this class (The Art Room as Container by Gilroy & McNeilly)
I began with the outer shapes, as I thought about softness and clouds, and how to make the client feel safe. I then added a stage for the clients to bring their work. Next I added a bookshelf as a holding space for wither artwork or feelings. Finally I defined the space in the middle and added clouds and 2 helping hands.

Some aspects that I tried to represent in my drawing as characteristics that I would bring to my office space as an art therapist are: 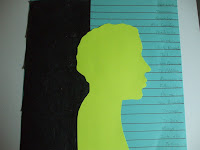 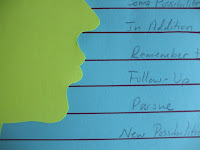 Process:
We had a variety of materials to choose from. I choose to work mostly with paper, creating a silhouette of myself, and added words at the end. The 3 strengths I choose for myself were: embracing the unknown, staying organized and connecting with others through my energy as a person.
Posted by Jamie at 6:23 AM No comments:

Jamie
Jamie is an artist, educator, and certified health coach. She received her master in fine arts from Otis College of Art and Design in 2011, and her certification in health coaching from the Institute of Integrative Nutrition in 2014. Her blogs help to document projects, practices, and new research, along with some editorial comments, which will hopefully keep you inspired and informed!